By Admin
September 22, 2012cheerdance competitionEntertainmentUAAP Season 75
The University of the Philippines (UP) Pep Squad did it again! Last year they’ve colored their hair blonde, now they’ve cut it short and wore semi-bald.

There were tweets that the UP Pep Squad donated their hair to make wigs for cancer patients. The sacrifice was worth it, specially for the ladies. Great job!

It was a tight competition for the championship between the Far Eastern University (FEU) Cheering Squad and UP, but in the end the judges declared the latter as this year’s champion. 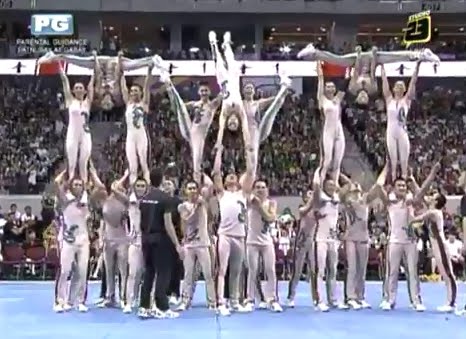 2012 Samsung Stunner:
Samsung Group Stunts:
Cheerdance Competition:
UP’s championship this year is their third time in a row and eighth in the entire CDC history.

Sponsored by Samsung, the 2012 UAAP Cheerdance Competition was held at the jampacked SM Mall of Asia Arena on Saturday, September 22, 2012.