In its 11am bulletin, PAGASA said Typhoon Karen was last estimated at 740 kilometers East of Aparri, Cagayan with maximum sustained winds of 185 kilometers per hour near the center and gustiness of up to 220 kph. It is forecast to move North Northwest at 15 kph.

No public storm warning signals has been raised. Weather experts believe that Bagyong Karen is “likely” to intensify into a super typhoon, but will not make a landfall. 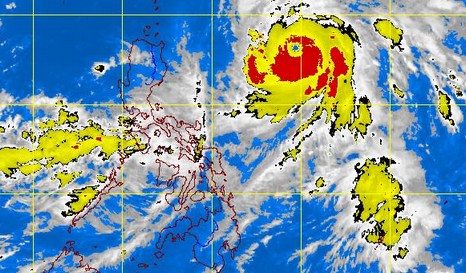 Metro Manila will be cloudy with moderate to heavy rains and thunderstorms. Moderate to strong winds blowing from the Southwest and Manila bay will be moderate to rough, PAGASA said.

Moderate to heavy rains and thunderstorms will be experienced over Calabarzon, Mimaropa, Bicol Region and Western Visayas. The rest of the country will have partly cloudy skies with brief rainshowers or thunderstorms, the weather agency said further.

Moderate to strong winds blowing from the Northeast to North will prevail over Northern Luzon and coming from the Southwest over the rest of the country with moderate to rough seas, PAGASA added.