According to this report, the debate would pit the tandem against Sotto and a partner of his choice if the senator accepts the challenge. If Sotto refuses it, he should let the Senate vote on the bill. 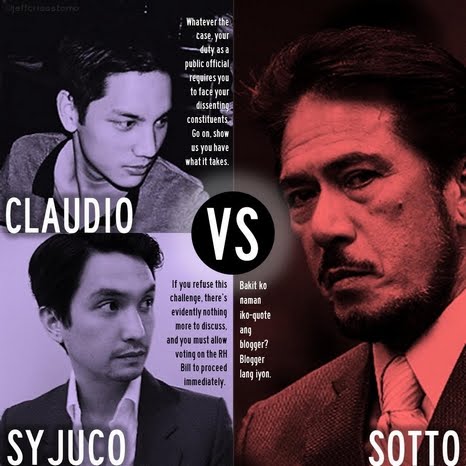 If Sotto gives the challenge a go, I suggest that he pick an official of the Catholic Bishops Conference of the Philippines (CBCP) so that the organization can also defend itself from allegations that it implemented “scare tactics” against congressmen and members of the Catholic church who are in favor of the passage of the controversial measure, among other relevant issues.

Once it pushes through, the proposed Sotto/CBCP Official vs Claudio/Syjuco RH Bill and Plagiarism debate will be streamed live in the internet and probably telecast in some television stations.

That would be awesome, but is unlikely to happen. Sotto, I think, will not accept the challenge. Why?

First, Sotto rejected a challenge made by Claudio last year. The senator reportedly said that “it would be an insult to senators Pia Cayetano and Miriam Defensor-Santiago who could defend the bill themselves.”

Second, Sotto is apparently “afraid” to take the challenge simply because he can’t argue spontaneously as far as the subject matters are concerned.

In his privilege speech on blogging and plagiarism at the Senate on August 29, Sotto insisted that he is not an expert and the content of his speech was based on facts and data which were only sourced from respected experts on sciences and laws.

Third, Sotto no longer wants to talk about the issue on plagiarism.

“This ends my privilege speech. Mr. President, with the permission of this body, I move that the paragraph containing reference with the study of Dr. Natasha Campbell-McBride which can be found in Journal No. 8 page 162 dated August 13, 2012 be stricken off the record in order to lay this matter to rest,” he stated.

I don’t expect the debate to happen, do you?