By Admin
September 22, 2012computergadgetsMobile DevicesSmart LTESmart LTE Pocket WiFitech newstechnology
Smart has introduced Friday its new new LTE Pocket WiFi, a device for those who want to use the company’s LTE service on non-LTE enabled smartphones and gadgets.

Smart said the LTE Pocket WiFi pricing and availability details will be announced early next month. 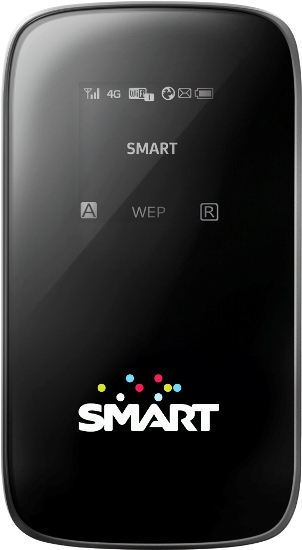 Smart Communications, Inc. (Smart), the lone operator of Long Term Evolution (LTE) in the Philippines, announced today that it will soon make available the Smart LTE Pocket WiFi, a device which will enable users to enjoy LTE speeds even on non-LTE enabled gadgets.

According to Smart Broadband Internet and Data Services Head Lloyd Manaloto, the portable WiFi router brings the power of LTE even closer to millions of Filipinos as it extends its LTE strategy even to non-Smart subscribers.

“LTE for All, that’s what the Smart LTE Pocket WiFi brings to the table,” said Manaloto. “Even if you don’t have a Smart LTE Plan or the latest LTE-enabled gadgets, you can already experience the power of Smart LTE,” he added.

Referring to an April 2012 study by market analytics firm GfK, the telco executive said that 99.7% of all smartphones in the Philippines today are WiFi-enabled. This, as he says, puts the number of potential users who could benefit from the LTE Pocket WiFi “in the millions”.

“As impressive as the GfK study already is, however, it doesn’t count other mobile devices such as tablets and laptops,” Manaloto explains. “Add to that ‘smart’ home appliances such as WiFi-enabled television sets and gaming consoles and you’ve got a huge market just waiting to be tapped,” he added.

Launched commercially last August, Smart LTE is initially offered on Plan 3500. The package includes a free LTE dongle which can be used on an unlimited basis until October 25, 2012.