Check out the details below: 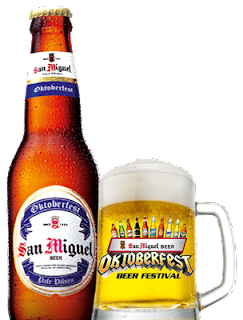 World-class entertainment, overflowing SMB beers for only P12 per cup!

On September 28 at the Aseana City in Macapagal Boulevard, Paranaque City, beer market leader San Miguel Brewery Inc. kicks off the country’s much-awaited, grandest and biggest beer fetsival, the San Miguel Oktoberfest 2012, with Fil-Am apl.de.ap of the supergroup Black Eyed Peas together with popular San Miguel Oktoberfest “Beer Festival” endorsers to give the ultimate beer party of the year.

For as low as P12.00, one can enjoy a cup of his favorite San Miguel Beer brand while seeing apl.de.ap, San Miguel Pale Pilsen’s newest endorser, bring the house down with his popular hits during the welcome party. To spice up the night, San Miguel Beer brand ambassadors Michael V., Ely Buendia, Pepe Smith, and Sam Pinto will also grace the event.

No other place in the country offers the lowest priced San Miguel Beers except in all San Miguel Oktoberfest grand celebrations on September 28 at Aseana City; September 29 in Sta. Rosa, Laguna; October 5 at MEPZ I in Lapu-Lapu City, Cebu; October 19 at Limketkai in Cagayan de Oro; and October 20 at Robinson’s Starmills in San Fernando, Pampanga.

The occasion is made extra exciting this year with the installation of six San Miguel Beer customized beer brand tents that feature diverse activities and performances for the enjoyment of all San Miguel Beer lovers.

San Miguel Pale Pilsen will put up its Beer Plaza where Filipino Pulutan Legends and the iconic San Miguel Pale Pilsen will be present and served by beer maidens. Manila’s clubbers will surely party in style with the hottest DJs in the metro in the San Mig Light Party All Night tent, courtesy of the first low-calorie beer in the country. It will be a hard core rock and roll night at the country’s no. 1 extras strong beer’s tent – the Red Horse Beer Pinoy Rock Tent.

According to SMB President Roberto N. Huang, this year’s “Beer Festival” focuses on relevant elements that are sure to delight every San Miguel Beer customer who anticipates the annual San Miguel Oktoberfest.

The idea, Huang said, is to “bring to the customer what the customer really wants in a beer festival, without fuss, and with variety of choices in one grand venue for celebration.”

“We are excited to bring our six brand tents to the San Miguel Oktoberfest “Beer Festival” kick-off party in Manila. Our valued customers will not only enjoy must-see performances from our world-class homegrown artists, they will also enjoy all their favorite San Miguel Beer brands with their friends, over activities that represent their diverse lifestyles,” explains Huang.

From September 1 to December 31, 2012, San Miguel is also giving away collectible premium items such as the limited edition mini beer bottle USBs and Tool Kits that come in the form of all San Miguel Beer brands. To win instant prizes, just collect 20 Oktoberfest-marked crowns of any San Miguel Beer brand. Items can be redeemed in San Miguel Brewery Inc. sales offices nationwide, Baliwag Lechon Manok branches in Luzon, and selected convenience stores in Visayas and Mindanao.

Of course, the celebration would not be complete without the star of the show - San Miguel Beer!