By Coolbuster
September 15, 2012boxerboxingJuan Manuel Marquezmanny pacquiaoPacquiao vs Marquezsports
Part four of the fight between Filipino boxing icon Manny Pacquiao and Mexican fighter Juan Manuel Marquez has been confirmed and set for December 8.

Pacquiao defeated Marquez in November last year, but the outcome of the match apparently turned out to be hollow and unconvincing to many.

“He has given us problems three times, I think he deserves a rematch first,” Roach said in an interview.

Marquez has always criticized Pacquiao, claiming that he was the real winner of their clashes in 2004 that resulted in a draw and in 2008 when victory was given to Pacquiao with just a single point. 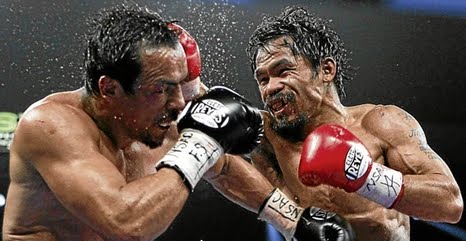 What Marquez and Roach wanted was given a green light by promoter Bob Arum. In many of his interviews with media, Pacquiao pointed out that he is ready to fight either Marquez or Timothy Bradley, who stripped him off his WBO welterweight belt in a controversial fight last June.

Promotional tours for the upcoming rematch reportedly start next week. But it seems selling the bout will be challenging for Arum and his team.

Online comments reveal that many boxing fans feel no more excitement for a quadrilogy.