By Admin
September 23, 2012crop circlesengineeringJapanmysterynewsphotographypufferfishvideo
The mysterious crop circles built underwater off the coast of the Anami Oshima island in Japan were, after all, not made by aliens. 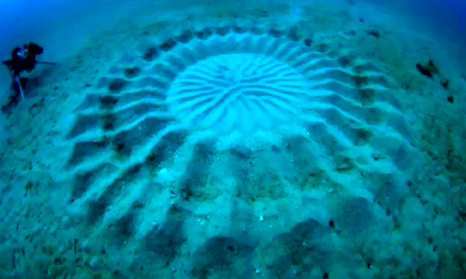 At first, diver and underwater photographer Yoji Ookata was clueless as to who or what built this one-of-a-kind structure at the bottom of the sea, until a film crew from Japanese broadcasting network NHK entered into the picture.

According to GeekoSystem, NHK discovered that the architect responsible for this very creative work of art was an “ordinary—but exceptionally hardworking—pufferfish.”

The male pufferfish carved-out the entire structure by “swinging his fin in the sand to create the grooves and ridges of the structure,” the size of which is much larger than his body, the report said.

Not only that, the tiny builder also reportedly decorated it with small stones and seashells.

You may ask, why did he do that? The TV crew found out that it was his way of attracting a mate. The following video explains further.