Based on DepEd Order No. 74 series of 2012 (copy embedded), candidates for honors in Grades 1 to 10 shall be drawn from the top ten students at the advanced level. They must not have a final grade lower than 85 (proficient level) and they should have no grade at developing level (75-79) in any quarter.

Education Secretary Armin Luistro said that to determine the top ten, pupils/students shall be ranked using the 7-3 point scheme. The 7 points are for academic performance while the three points are for co-curricular activities.

“We have to put weight on other activities that are not academic in nature as part of school nurturing that focuses on other aspects of a child’s total development,” Luistro explained. 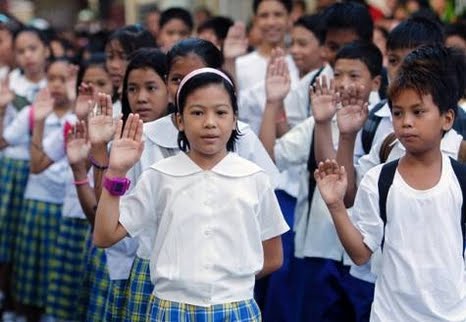 Photo credit: news.charlesayoub.com
All candidates for honors must be of good moral character and have not been subjected to any disciplinary action within the current school year. Achievements in specific academic disciplines such as Math, Science, English and in curricular areas such as sports, arts and campus journalism, shall also be given recognition.

The new grading system uses descriptive remarks and is more illustrative of the proficiency level of students.

Under the new grading system, students are assessed based on the level of proficiency starting with Beginning (whose numerical equivalent is 74% and below), Developing (75%-79%), Approaching Proficiency (80% to 84%), Proficient (85-89%) and Advanced (90% and above).

The guidelines are implemented starting school year 2012-2013 for Grades 1 and 7.

The existing DepEd Order No. 92 s. 2009 shall still apply in selecting honor pupils in Grades 2 to 6 in the elementary level and Second year to Fourth year in the secondary level.