By Admin
September 14, 2012anti-islam filmfeaturefilmInnocence of MuslimsLawmovieNakoula Basseley NakoulanewsSam BacileYouTube
The key figure behind the so-called anti-Islam film ‘Innocence of Muslims’ that sparked anti-US protests in Egypt and Libya earlier has been identified.

This report tells us that an anonymous federal law enforcement official said Thursday that Nakoula Basseley Nakoula, 55, was the man who allegedly wrote and directed the controversial film which protesters claimed defamed the Prophet Muhammad. 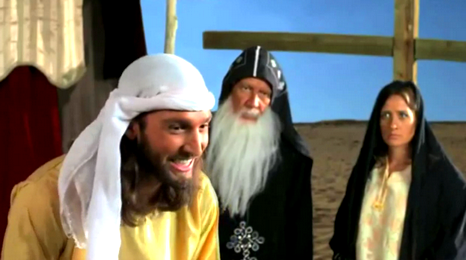 Screenshot from ‘Innocence of Muslims’
Nakoula is reportedly connected to the persona of Sam Bacile, who initially claimed to be the writer and director of the film but turned out to be a false identity.

The YouTube account used in uploading clips of the film beginning July falls under the username “Sam Bacile.”

The Associated Press traced a mobile number used by Bacile to a southern California house where Nakoula was located.

The AP report says Nakoula denied he had posed as Bacile, but documents from a 2010 case filed against him revealed that he used several fake names, among them “Nicola Bacily.”

That time, Nakoula pleaded no contest on bank fraud charges. He was reportedly sentenced to 21 months in jail and was ordered to pay more than $790,000 in restitution.

Nakoula was also ordered not to use computers and internet for five years without approval from his probation officer. If proven that he and Bacile are one and the same person, Nakoula could also be penalized for violating that court order.

Meanwhile, the online film has been pulled down on YouTube in Egypt, but is still accessible in the United States and other countries.