This week, the top 9 acts paid tribute to music icons who passed away.

Modesto Taran, the man with the golden voice, performed the opening number. The song, “Pure Imagination” by Lou Rawls, who died on January 6, 2006 due to lung cancer, was perfect for his age and voice.

XFP judge Pilita Corales commented that Modesto’s diction has improved while Martin Nievera said he’s got the most beautiful voice in the competition. 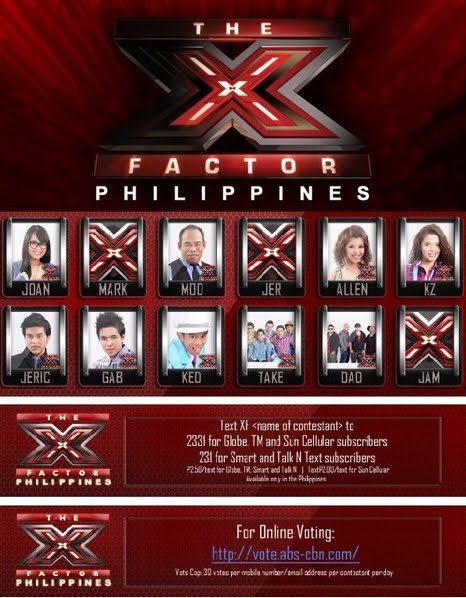 Daddy’s Home blended well in singing “All At Once,” an all-time favorite from the pop legend Whitney Houston who was found unresponsive in a bathtub inside her room at the Beverly Hilton Hotel on February 11, 2012.

Allen Sta. Maria looked very cool on stage while singing and rapping “Waterfalls,” a Grammy Award-nominated 1995 single by the American musical trio TLC whose member Lisa “Left Eye” Lopes was killed in a car crash in the Honduras on April 25, 2002.

Next was Jeric Medina. His version of the 1962 hit “Can’t Help Falling In Love” by Elvis Presley, the “King of Rock and Roll” who died on August 16, 1977, surely captured the hearts of ladies watching at the PAGCOR Theather and at home.

Joan Da performed “At Your Best” from Aaliyah, her personal favorite singer who died in a plane crash in the Bahamas on August 25, 2001 after filming a music video.

Kedebon Colim had his usual energetic performance. He sang “Yugyugan Na” by Karl Roy who died from “complications due to pneumonia” on March 13, 2012.

The XFP boyband Takeoff performed “Dreaming of You” by Selena, the top Latin artist of the ‘90s who was murdered by a former fan club president on March 31, 1995.

KZ Tandingan has maintained her level of performance with “Rehab” by Amy Winehouse who died of alcohol poisoning on July 23, 2011. Amy won three Grammy Awards in 2008, including Record of the Year, Song of the Year, and Best Female Pop Vocal Performance, for the song.

Gab Maturan singing the ballad “Dance With My Father,” which won a Grammy Award in 2004 for ‘Song of the Year’, was the closing performance for the night. Luther Vandross, the original singer, died on July 1, 2005 due to a heart attack.

We hope you enjoyed reading a little bit of history behind the songs performed by the X Factor Philippines top 9. Now it’s time to vote!