By Admin
August 05, 20122012 London Olympicsbasketballsports
Thanks to Lebron James, who scored 9 of his 20 points in the last 4 minutes, Team USA survived a hard-fought game against Lithuania in the 2012 London Olympics hoops tourney.

Deron Williams finished with 12 points, Carmelo Anthony added 20 and Kevin Durant made 16 in the U.S. win.

Chris Paul contributed 7 points and 6 assists, 7 seven rebounds and 4 steals, while Kevin Love had 7 points and 8 boards to become the team’s highest rebounder.

Linas Kleiza of the NBA’s Toronto Raptors kept Lithuania in the game with 25 points with the help of Martynas Pocius who dished out 6 assists and scored 14 points. 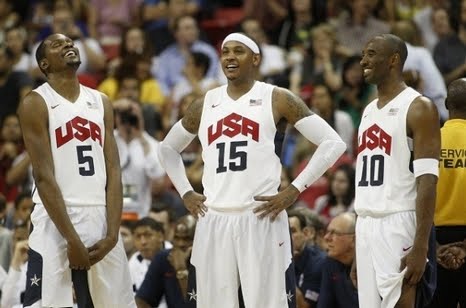 The star-studded American squad remains undefeated in Pool A in the preliminary round with a 4-0 win-loss record, followed by France (3-1), Argentina (2-1), Nigeria (1-2), Lithuania (1-3) and the winless Tunisia.

The quarterfinals will take place on August 8, the semifinals on August 10, and the finals are scheduled on August 12.