Bagyong Helen was last spotted 230 kilometers East Southeast of Tuguegarao City with maximum sustained winds of 85 kilometers per hour near its eye and gustiness of up to 100 kph. It is forecast to move Northwest at 13 kph.

TS Helen, which was predicted to make a landfall in the next 24 hours, is expected to exit the Philippine Area of Responsibility by Thursday evening.

It is unlikely that Helen will become a Typhoon, weather experts said during a press briefing Tuesday noon. 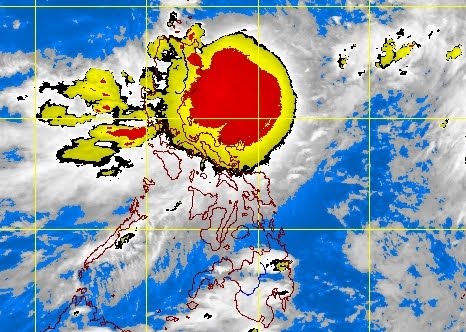 Helen is expected to enhance the Southwest Monsoon bringing rains over Luzon and Visayas especially over the Western section, the weather agency said in its latest bulletin.

Estimated rainfall amount, PAGASA said, is intense to torrential (20 up to 35 millimeters per hour) within the 500-kilometer diameter of the tropical storm.

Fishing boats and other small seacrafts have been advised not to venture out into the seaboards of Central and Southern Luzon and Visayas due to these weather disturbances.

Some schools have already suspended their classes for today. View the list here.