A GREEN warning means flooding is threatening and residents are being alerted for possible evacuation.

As of 5:30 AM on August 8, 2012, PAGASA said moderate to heavy rainfall (10.0-15.0 millimeters per hour) was recorded over the CAMANAVA area and th northern portion of Quezon City, while there’s light to moderate rainfall (2.0-5.0 mm/hr) over the rest of Metro Manila. 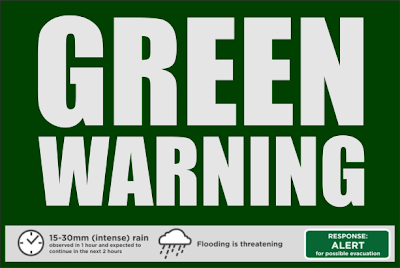 Weather experts said moderate to heavy downpour (7.5-12.0 mm/hr) is expected over Metro Manila and at times heavy to intense rainfall (10.0-20.0 mm/hr) within the next 2 hours.

The Southwest Monsoon enhanced by Tropical Storm “Haikui” spotted at Northeast of Taiwan brings occasional to frequent rains over Luzon including Metro Manila and moderate to heavy rains in neigboring provinces.

PAGASA advised residents in flood/landslides risk areas to take precautionary measures and to monitor the next warning.

Earlier, local government units in most parts of the metro have declared suspension of classes for Tuesday.