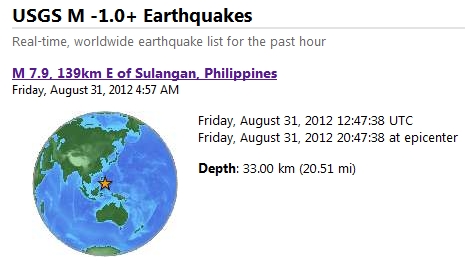 It was felt in most parts of Mindanao and the Visayas regions including the cities of Cagayan de Oro, Davao, Cebu, and Tacloban.

The quake was detected in the following areas with the corresponding intensities, according to PHIVOLCS:
According to @RescuePH on Twitter, PHIVOLCS recorded the earthquake, which lasted about 30 seconds, at 7.7 magnitude. The USGS lowered it to 7.6 magnitude an hour later.

The agency also reportedly said that “due to the strength of the earthquake, the formation of a tsunami is possible.”

According to PHIVOLCS director Renato Solidum, a tsunami alert has been raised in coastal areas of Surigao del Norte, Southern Leyte, and Samar.

Solidum said the estimated wave height of the possible tsunami is around 1 meter to 1.5 meters. He said aftershocks are also expected to occur.

The National Disaster Reduction and Risk Management Council has reportedly urged residents living in coastal areas in Northern and Eastern Samar, Southern Leyte, Surigao del Sur, and Surigao Norte to evacuate and be advised to cooperate with their respective local government units (LGUs).

NDRRMC executive director Benito Ramos in a radio interview said there have been no reports of damage to life and property so far.

In an interview, Surigao del Norte governor Sol Matugas said evacuation of residents from the coastal areas in Surigao City and Siargao have already started.