By Admin
August 25, 2012featurenewsNLE mass oathtakingSimplified Oathtaking
Congratulations to those who passed the June 2012 NLE! For information on the schedule of oathtaking of new nurses, kindly read this update.

Board of Nursing member Marco Antonio Sto Tomas posted on his Facebook page that “NCR deans have bonded together to plan for a consolidated-coordinated oathtaking” for NLE June 2012 passers.

“The Association of Deans of NCR has started talks and plans of conducting a joint-collaborative oath taking for their graduates,” he said in a separate status update.

Sto Tomas clarified, however, that he is making the announcement in his personal capacity.

In a follow-up post, Sto Tomas revealed that the BoN will also schedule oathtaking rites at the PRC for those who would opt to take it. This means that the upcoming oathtaking of new nurses is not compulsory. 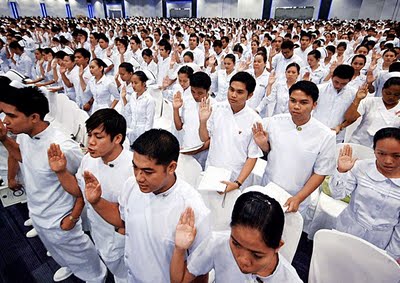 The BoN is expected to issue an advisory containing the guidelines on mass oathtaking similar to the one issued in May this year.

Last year, the BoN issued an advisory declaring the “simplification and cost saving measures in the conduct of oathtaking of new nurses all over the country.”

The policy became a subject of an online debate between those who are for and against mass oathtaking.

A “simplified oathtaking” means new nurses may take an oath, individual or by group, at the same time of registration at PRC.

That time, Sto Tomas explained that the BoN has “done away” with the “traditional mass oathtaking” to respond to “current economic difficulties” and “current job scarcity” among nurses.

The advisory earned both praises and criticisms.

Eventually, the PRC decided to bring back the mass oathtaking with the Philippine Nurses Association and other concerned groups providing support.