I apologize If I had offended anyone in my previous* tweets. I did not mean to disrespect sec.jess. I was merely inquiring about his life.*
— Julio Villafuerte (@juli0v) August 28, 2012

“Been reading Jess Robredo tweets for weeks now. Someone please inform me of any major accomplishments Jess has done, coz I don’t know any.”

“I don't mean to hate, I’m just more interested in reading about other news that’s going on in the Philippines.” 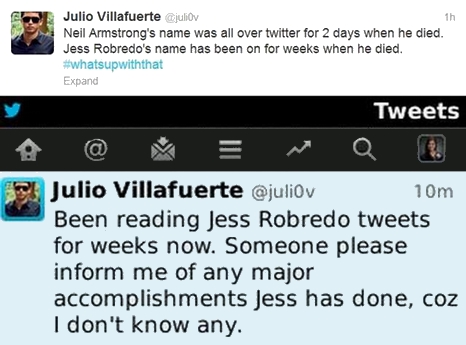 Obviously, statements like that will be given color specially if expressed by someone who’s related or associated to a political rival, regardless of intention.

Julio’s grandpa, congressman Villafuerte, is reportedly the reason why Robredo was not confirmed as interior and local government secretary.

Apparently, the lawmaker wanted Robredo to explain before the Commission on Appointments the graft cases against him when he was still the mayor of Naga.

The lawmaker denied the allegation, saying Robredo was already scheduled for confirmation when he died in a plane crash off the coast of Masbate City.