By Admin
August 22, 2012airlineflightJessup BahintingnewsRobredo plane crashtravel safety
Technical divers involved in the retrieval operations recovered Wednesday, August 22, the remains of Captain Jessup Bahinting, pilot of the light aircraft that crashed off the coast of Masbate City over the weekend.

DOTC Secretary Mar Roxas said the plane fuselage was lifted to a shallower level making it easier for divers to retrieve the body of Bahinting.

Roxas earlier said that the body recovered was unrecognizable, but Bahinting’s brother, Orson, identified it as that of the plane’s pilot minutes later. 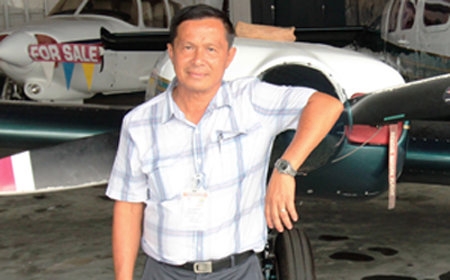 The remains of DILG Secretary Jesse Robredo were retrieved Tuesday, August 21, while the body of Bahinting’s co-pilot, Nepalese flight student Kshitiz Chand, is yet to be recovered.

Capt. Bahinting is also the chairman and chief executive officer of AVIATOUR Air which owns the ill-fated Piper Seneca plane.

Bahinting, the site says, “holds a commercial pilot’s license and is a certified flight instructor who loves to fly for fun.” He has logged “more than 6,000 flight hours.”