By Admin
August 28, 2012DILGGovernmentJesse RobredonewsPhilippines
Tuesday, August 28, is the last day of National Mourning for the late Secretary of the Interior and Local Government Jesse Robredo.

The Committee on Funeral Arrangements and Burial of the late secretary posted the following details through its Bulletin No. 12 released today:

“At 10:00 a.m., a Concelebrated Requiem Mass will be officiated by Fr. Manuel Nicolas, SDB, and Fr. Kulandairaj Ambrose of the Missionaries of the Poor (MOP).

The Concelebrated Requiem Mass will be followed by the conferment of the Philippine Legion of Honor (posthumous) on the late Secretary, and then followed by the eulogy of the President. After this, the State Funeral proper begins.

The casket bearing the remains of Secretary Robredo will be escorted from the Basilica Minore de Nuestra Señora de Peñafrancia to the Funeraria Imperial. The Armed Forces of the Philippines and the Philippine National Police will render departure and arrival honors.

Music for the funeral cortege will be rendered by the PNP Band with the following playlist:
There will be eight honorary pallbearers who will escort the casket bearing the remains of Secretary Robredo: 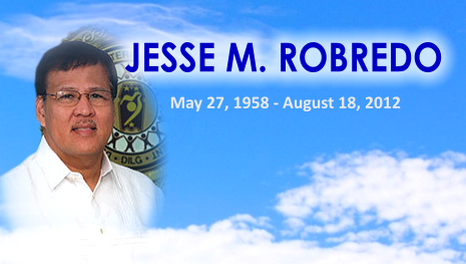 Reports said Secretary Robredo’s remains will be cremated after the state funeral.

Farewell and thank you Sec. Jesse.