What residents in flood-prone areas must build

By Admin
August 10, 2012how tonews
Several communities in Luzon including Metro Manila have been devastated by massive flooding caused by heavy monsoon rains enhanced by typhoon ‘Haikui’ in the past few days.

The National Risk Reduction and Management Council (NDRRMC) reports that based on the data provided by the Department of Social Welfare and Development (DSWD) as of 3pm Thursday, August 9, a total of 3,116 houses were damaged in regions 1, 3, 4-A, 4-B and 6.

Three hundred sixty six (366) of which were totally damaged and 2,750 were partially damaged.

The total number of flooded areas in cities and municipalities from the National Capital Region (NCR), regions 1, 3, and 4-A is eighty (80).

The deluge claimed 49 lives, according to the NDRRMC.

Damages to houses, evacuations and deaths could be minimized, if not prevented, if residents in flood prone areas would build something like this: 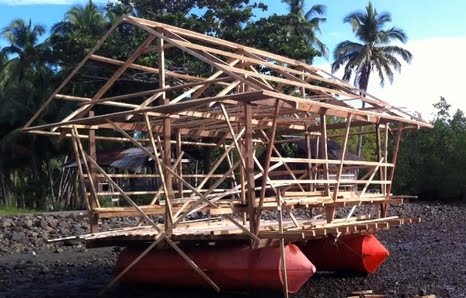 This floating house model is already finished. We will update this post upon availability of photos.