By Admin
August 02, 2012newspress releases
The Department of Foreign Affairs (DFA) expects to open at least 11 more consular offices in shopping malls across the country before the end of the year as part of its efforts to more effectively deliver passport and other services to the public.

Foreign Affairs Secretary Albert F. del Rosario made the announcement during the inauguration this afternoon of the new DFA consular office at the upscale MarQuee Mall in Angeles City—the third mall-based consular facility in the country and one of 30 such facilities that the DFA will open in the next two years.

In his remarks during the inauguration of DFA Angeles, Secretary del Rosario said the public can look forward to better consular services and facilities by December with the opening of at least 11 other passport offices in shopping malls nationwide.

“Before the end of the year, we will have at least 14 mall-based passport offices serving the public in Metro Manila and other parts of the country. By 2014, we should have 30 such facilities operating in shopping malls across the country,” Secretary del Rosario said.

“Our new consular facility here at MarQuee Mall is the result of an out-of-the-box formula that the DFA pursued last year to make our services more accessible to the public,” Secretary del Rosario said, adding that this was the result of the Public-Private Partnership (PPP) arrangements the DFA entered into with Pacific Mall Corporation, Robinsons Land Corporation, Ayala Land Incorporated and SM Prime Holdings.

“Our PPPs with our partners not only allowed the Department to provide much-needed comfort and convenience to passport applicants but also saved for the national government an initial P1.14 billion in operating costs over the next 10 years,” Secretary del Rosario said. 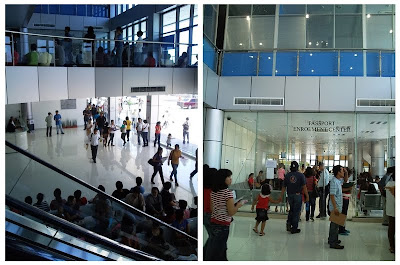 The Secretary said the applying public can also look forward to the opening of passport offices in Laoag, Batangas, Iloilo, Tacloban, Puerto Princesa, Butuan and Cagayan de Oro before 2014.

Just last week, the DFA concluded negotiations for the hosting of consular offices at the Pacific Mall in Legazpi and at Metro Gaisano at the Ayala Town Center in Alabang. Secretary del Rosario also disclosed that the DFA is in the final stages of negotiations with private sector proponents for the hosting of consular offices in several other locations.

DFA Angeles, which is being hosted by Ayala Land, is one of the largest mall-based consular offices of the DFA with a floor area of 811 square meters. It is configured to accommodate at least 500 passport applicants per day.

“Those of you who have been served in our former offices would certainly see the difference in terms of how we look and the service we provide. But we are not stopping there,” Secretary del Rosario said.

“As part of our efforts to further serve the public, these mall-based consular offices will process passport applications from 10 a.m. to 8 p.m., Mondays to Saturdays. We will also be open half-days on Sundays to let applicants claim their passports.”

“Last month, I approved a new set of guidelines that would allow us to further improve the delivery of services. By December, we hope to put in place a dedicated call center that would allow applicants to schedule the time and day they prefer to be served at any of our consular locations in Metro Manila and other parts of the country,” the Secretary said. “With this, we hope to finally be able to deal with the long lines that have become synonymous with the passport application process.”

It was the second Seal of Excellence Award received by the DFA since last year when the Regional Consular Office in Tacloban was presented with the same award.

The Citizen’s Satisfaction Center Seal of Excellence Award is conferred to central, regional, provincial, and field offices of national government agencies and local government units that have accumulated high marks in the report card survey conducted by the CSC as required by RA 9485, otherwise known as the Anti Red Tape Act (ARTA) of 2007.

Press release from the Department of Foreign Affairs