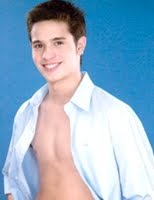 In an interview with veteran talk show host and entertainment columnist Cristy Fermin via phonepatch, the actor revealed that they named her “Rhiana” for having been delivered during the onslaught of the monsoon rains in most parts of Luzon earlier this week.

Cogie said the baby will be nicknamed “Rain.”

Asked if there will be changes in his life and career now that he has a baby, the actor answered positively, saying he is “very inspired” and will strive harder for his angel.

To keep her life private, Cogie declined to mention the real name of his partner. He only hinted that the baby’s mom is his ‘childhood sweetheart’.