By Admin
August 25, 2012Bagyong IgmeBagyong JulianFujiwhara EffectnewsPAGASA Weather ForecastStorm Watchweather update
Tropical Storm Igme has been forecast by PAGASA to make a counter-clockwise looping motion within the next 24-48 hours due to its interaction with Typhoon Julian.

Experts call it the Fujiwara effect, a type of interaction between two nearby cyclones causing them to appear to orbit each other. 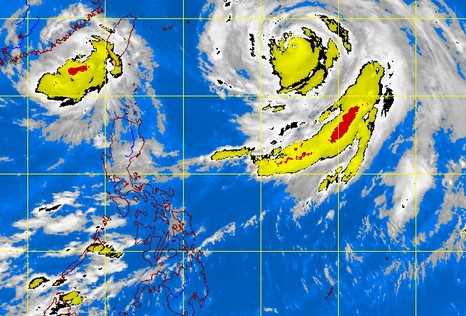 The state weather bureau reported that as of 4am Saturday, the center of Igme was last spotted at 370 kilometers Northwest of Basco, Batanes with maximum sustained winds of 100 kilometers per hour near the center and gustiness of up to 130 kph. It is forecast to move West Northwest at 13 kph.

Public storm warning signal number 1 (30-60 kph winds) is still up in Batanes group of islands because of Igme.

Meanwhile, Typhoon Julian was located at 970 km East Northeast of Basco, Batanes with maximum sustained winds of 150 kph near the center and gustiness of up to 185 kph. It is forecast to move Northwest at 15 kph.

These cyclones are expected to enhance the Southwest Monsoon, which itself affects the rest of Luzon, the whole Visayas and Mindanao, bringing rains over the western section of the country.


* * *
Thank goodness these weather disturbances are far from the country. Otherwise devastation is unimaginable if both hit PH at the same time.