As of 4 p.m. today, PAGASA says Gener was spotted 260 kilometers East Northeast of Basco, Batanes with maximum sustained winds of 120 kilometers per hour near the center and gustiness of up to 150 kph. It is forecast to move North at 7 kph. 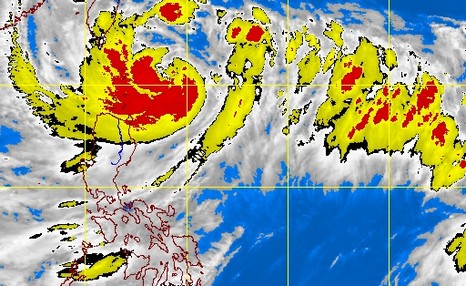 PAGASA says TY Gener is expected to enhance the Southwest Monsoon bringing rains and moderate to strong winds over Luzon and Visayas, especially the western section.

The weather agency alerted residents living in low lying and mountainous areas against possible flashfloods and landslides. Those living in coastal areas under signals 2 and 3 were also alerted against big waves or storm surges.

Estimated rainfall amount is heavy to torrential, that’s from 10 up to 35 millimeters per hour, within the 700 km diameter of the typhoon.

Fishing boats and other small seacrafts are advised not to venture out into the Seaboard of Luzon and Visayas due to the combined effect of Gener and the Southwest Monsoon, PAGASA added.

Meanwhile, several schools in Luzon have no classes today. You can find the list here.