Mick Pennisi's Trending Flop Makes Him ‘Best Actor’, Might Catapult Him To Stardom

By Admin
March 24, 2012Entertainmentsports
Mick Pennisi, who plays center for Barako Bulls, used his head for his team to win against Petron Blaze Boosters at the PBA on Wednesday. His flop is trending and it seems everyone agrees that he could become a great actor. 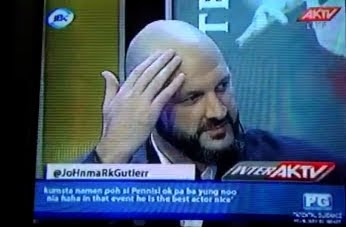 Earlier, the Filipino-Australian bastketballer joked, “I think I’m going into acting after my PBA career is over.”

Hosts of a Philippine Basketball Association (PBA)-produced sports show has created a term for his epic flop. They now call it “Pennisi-ing.”

In a segment titled “Basketball Science,” Pennisi even explained the incident (er, his acting).

Pennisi admitted that he was embarrased for his action, but is apparently taking everything lightly and enjoys the popularity he has now.

He even said he’s happy the so-called ‘delayed reaction’ made people laugh.

“I was embarrassed, but when you look at it, you just gotta laugh,” he said. “As long as what happened makes people laugh, then I’m happy.”