By Spicy Sugar
December 04, 2011Entertainment
Popstar Princess Sarah Geronimo on Sunday, December 4, admitted on ABS-CBN’s “The Buzz” that Gerald Anderson, her leading man in the blockbuster movie “Won’t Last A Day Without You,” makes her smile again. 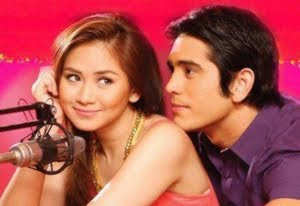 The talk show had a report on Sarah and Gerald who were caught on cam holding hands together during the film’s premiere night and dinner party.

According to “The Buzz” report, “Won’t Last A Day Without You” grossed P50 Million in just four days, P20M of which was earned on opening day alone.

Both did not deny their public holding hands most of the time that night.

In the interview with “The Buzz” host Toni Gonzaga, the actress revealed said she admires how Gerald takes care of her as a leading lady.

Gerald, meanwhile, when asked during the ‘fast talk’ interview as to what part of Sarah’s body would he kiss if there’s a chance, quickly replied: “Lips!”

When Toni asked him what gift he’d prefer to give Sarah this Christmas, Gerald replied: “a dinner.”

If in case their loveteam becomes true-to-life, will it get the approval of Kimerald fans?