By Admin
December 12, 2011news
Robin Lim, a Filipino-American professional midwife and founder of the Yayasan Bumi Sehat health clinics which offer free prenatal care, birthing services and medical aid to anyone who needs it in Indonesia, was named the 2011 CNN Hero of the Year over the weekend. 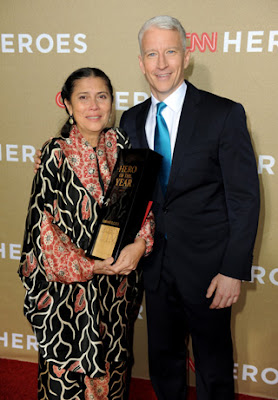 Lim, born to an American father and Filipino-Chinese mother, has been helping thousands of poor Indonesian women have a healthy pregnancy and birth since 2003.

The Bali-based midwife is the second CNN Hero of the Year who is of Filipino descent. The first one was “push cart educator” Efren Peñaflorida in 2009.

Lim received the award in a ceremony at The Shrine Auditorium in Los Angeles last Saturday. Teary-eyed, she said in her acceptance speech:

“Today on our Earth, 981 mothers in the prime of their life will die - and tomorrow again and yesterday. And I’m asking you to help change that. We don’t even know how many babies are lost, but all of us can help change that.”