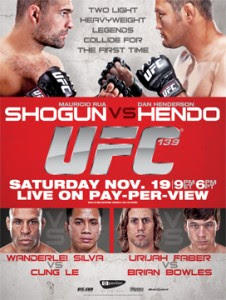 ABS-CBN Sports in its official Facebook page announced that the UFC 139 video replay will air on Studio 23 at 11:30 tonight.

With the replay, fans will be able to watch and know what really happened in the much-discussed main event bout between veteran fighter Dan “Hendo” Henderson and former light heavyweight champion Mauricio “Shogun” Rua.

In that match, Henderson won via unanimous decision. All three judges gave the American the victory on identical scores of 48-47. He was, however, sent to the hospital due to injuries.