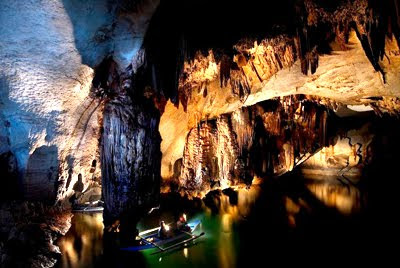 Aside from PPUR, other sites such as the Amazon rainforest in South America, Halong Bay in Vietnam, Iguazu Falls in Argentina, Jeju Island in South Korea, Komodo national park in Indonesia, and the Table Mountain in South Africa likewise made it to the top seven list.

The New7Wonders foundation said, however, that the provisional result was based on initial counting of votes and is subject to change until the finally confirmed winners will be announced early next year.

Sites which entered the top ten but failed to make the cut at this time are Mount Kilimanjaro in Tanzania, the Dead Sea along Israel, Jordan and Palestine, and the Grand Canyon in the US.

People from around the globe were able to participate in the New 7 Wonders of Nature poll to determine the world's best natural wonders through personal certificates as well as text and online voting.

The city government of Puerto Princesa in the province of Palawan spearheaded the campaign in the Philippines with support coming from the national government and its line agencies such as the departments of Tourism, Education and the Interior and Local Government, and civic groups among many others.