By Spicy Sugar
November 28, 2011EntertainmentPiolo Pascual
Kapamilya actor Piolo Pascual has finally broken his silence on the issue relative to his break-up with singer-actress KC Concepcion. 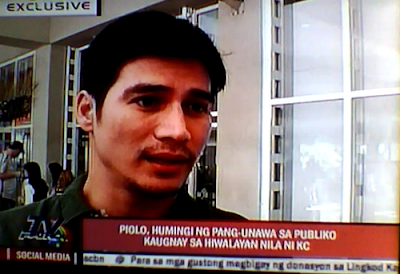 The hunk actor gave his reaction on KC’s exclusive interview on “The Buzz” last Sunday, November 27.

In an ambush interview at the airport, which was aired over TV Patrol on Monday, November 28, Piolo said:

Piolo did not detail how he feels, the report said. The actor instead asked for patience and understanding from the public and apologized to those who are dragged and affected by their break-up.