By Spicy Sugar
November 25, 2011EntertainmentNora AunorStar Awards for TVTV5
The biggest stars from different networks may have graced the recently concluded 25th Star Awards for TV, but the luster of the one and only Superstar, Ms. Nora Aunor, proved to be the brightest. 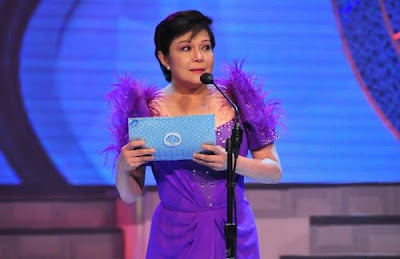 She received the special award for the musical variety show Superstar which holds the record as the longest-running musical show on Philippine TV after lasting for 22 years on air.

Following Aunor’s highly publicized return to the Philippines and a successful TV comeback via the Kapatid Network’s first miniserye Sa Ngalan ng Ina, the local industry was quick to merit the Superstar the highest distinctions every award-giving body could give. The Superstar recently received a Lifetime Achievement Award and an Icon of Original Pilipino Music (OPM) from the PMPC Star Awards, the Honorary Originals of Philippine Cinema Award at the Cinema One Originals Independent Film Festival, and another Lifetime Achievement Award at the 13th Cinemanila International Film Festival.

Aside from Nora Aunor, five other Kapatid shows and personalities bagged recognitions at the Star Awards for TV on its silver year.

Talentadong Pinoy was hailed the Best Talent Search Program at the awards night. The country’s biggest talent show is also set to compete in this year’s Asian TV Awards under the Best General Entertainment Category. Talentadong Pinoy was also awarded a special citation by the Catholic Mass Media Awards recently.

Bitag once again clinched the Best Public Service Program award. The popular crime investigative program, hosted by Ben Tulfo, recently moved back to TV5, its original home, after nearly a decade on air.

The Star Awards for TV awarding ceremony was co-hosted by Kapatid star Richard Gomez, who will soon host the international game show franchise The Biggest Game Show in the World: Asia on TV5.