By Unknown
November 16, 2011microsoftsocial networkingsocltech news
News about tech giant Microsoft’s “secret” social network, which according to our source will be called “Socl,” is making rounds on the web today. 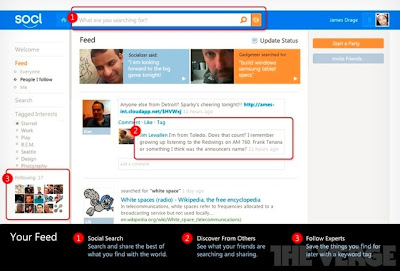 The Verge published basic details about Socl after they were apparently given exclusive access by the team behind it.

Socl, it said, is a mix of search, discovery, and a social network.

Based on screenshots, the design looks like a combination of Facebook and Google+. It has a three-column layout, a basic navigation in the left rail, a social feed at the middle, invites and video party options on the right panel.

The colors are similar to what’s on the UI of Microsoft’s latest operating system, Windows 8.

There's also a search box at the top that asks “What are you searching for?” According to The Verge, entering a search term or status update drops it into your feed with appropriate Bing results, where your friends will have the option to comment, like or tag.

Tech blogs say that Socl is not a replacement for Facebook. Instead, it will work with the largest social network which enables users to share to and from their Facebook connections.

Apart from Twitter, Facebook and Google+, netizens will have another option for sharing experiences, stories and other stuff with their loved ones and friends on the web once Microsoft’s Socl goes public.

Will you try to use it?