By Spicy Sugar
November 06, 2011ASAP RocksEntertainmentJuris Fernandeztrending topictwitter
Juris Fernandez, former MYMP lead vocalist who has gone solo and now a member of ASAP Sessionistas, immediately became a Twitter trending topic nationwide after it was revealed on ASAP Rocks on Sunday, November 6, that she is getting married. 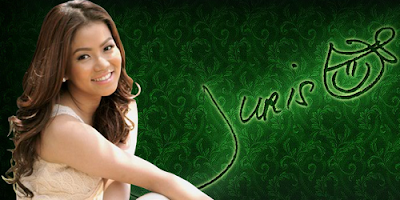 Juris’ co-Sessionistas Princess Velasco, Richard Poon, Aiza Seguerra, Duncan Ramos and Sitti, who gave their inspirational personal messages to the soon-to-be-bride, sang a selection of the couple’s theme songs during their production number.

Hours before the show, Juris in her Twitter account expressed her excitement, but did not elaborate further so as not to preempt her surprise announcement later.

“Excited ako sa aming Sessionistas prod coz i can relate to all d songs :),” the singer tweeted.

Sitti, the bossa nova singer, even requested Juris to show her engagement ring on camera, which the latter happily granted.

After the group’s performance, ASAP Rocks main host Martin Nievera asked Juris when and where the wedding will be held. “Soon,” Juris replied, but did not say anything about the venue where she would tie the knot with her non-showbiz fiancé.

Right after the show, she became the eighth most discussed topic on the micro-blogging and social networking site. Juris thanked her fans/followers for making her a trending topic, her first time ever.