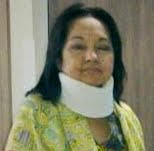 Speaking to ANC, the health secretary said “Arroyo's medical evaluation is only part of the overall assessment for her request to travel.”

According to Arroyo's allies, the former president “needs a bone biopsy to find the cause and solution to her rare bone disorder, a procedure that could only be done abroad,”

Ona said a bone biopsy is a simple procedure, but its availability here depends on the type of test to be done on the bone tissue.

The Arroyo family is awaiting the decision of the Department of Justice (DOJ) on GMA's application for Allow Departure Order (ADO) that would permit her to go abroad for medical treatment.

However, Justice Secretary Leila De Lima during Thursday's press briefing said that there is no extreme necessity for the ex-president to leave the country to seek medical treatment.

“It would appear from all indications and from the report of Secretary Ona that the former president is recuperating very well. Her condition is improving, and therefore, there seems to be no immediate necessity, at this point, for us to grant the request,” De Lima said.

De Lima said she will issue her decision next week.

“Since Monday (November 7) is a holiday, I will be issuing my order Tuesday next week, at the latest Wednesday,” she said.