By Admin
November 10, 2011Albie CasiñoAndi EigenmannDNA TestEntertainmentJaclyn Jose
Andi Eigenmann’s mother, Jaclyn Jose, in a recent interview said she is not open to the idea of subjecting her upcoming grandchild to a DNA test amid demands for it from the family of Albie Casiño, the alleged father of the baby. 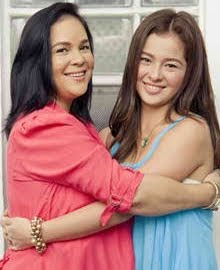 According to reports, Jaclyn heard of the Casiños’ offer for help which she declined to accept, saying they can raise the baby on their own.

The tough and straightforward Jaclyn added that the entire Casiño clan will never be part of her grandchild’s life.

“They will never be part of my apo. I don’t wanna deal with them. They’re not welcome in Andi’s life, or my apo’s life,” she said, according to reports.

Jaclyn also bared that offers are already awaiting Andi who is expected to make a comeback next year.

When it comes to love life, the actress said she already warned her daughter not to make the same mistake, otherwise she will get mad on her.