Tropical Depression “Ramon” has maintained its strength as it continues to threaten Eastern Visayas and Northeastern Mindanao, the Philippine Atmospheric and Geophysical and Astronomical Services Administration (PAGASA) announced on Tuesday, October 11, 2011. 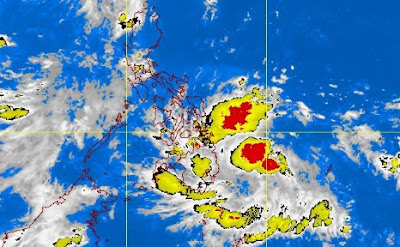 As of 11:00 a.m. today, the state weather bureau said “Ramon” was spotted at 245 kilometers (km) East of Hinatuan, Surigao del Sur with maximum sustained winds of 55 kilometers per hour (kph) near the center. It is moving West Northwest at 17 kph.

Weather experts said Ramon will make landfall in the Visayas area by 2:00 p.m. on Wednesday, October 12. PAGASA expects “Ramon” to intensify into a Tropical Storm within the next 24 hours.

Signal No. 1 (45-60 kph winds):
Estimated rainfall amount is from 5 - 20 millimeters per hour (moderate to heavy) within the 300 km diameter of the Tropical Depression, PAGASA said.

Residents in low lying and mountainous areas under signal # 1 are alerted against possible flashfloods and landslides, the bureau added.