Taal Volcano Signage Not “Batangas” But “Ala Eh”

By Admin
October 26, 2011BatangasnewsPAMBTaal VolcanoVilma Santos
The signage that will be possibly put up in Taal Volcano is not the word “Batangas” but the Batangueño expression “Ala Eh,” an official of the Protected Area Management Board (PAMB) of the Taal Volcano Protected Landscape revealed.

According to an October 26 press release from the Department of Environment and Natural Resources, DENR-CALABARZON regional executive director Nilo Tamoria said that the PAMB of the Taal Volcano Protected Landscape is yet to decide on the proposed Hollywood-type signage that will be put up on Taal Volcano island.

He also clarified that the proposal was not the word “Batangas,” but the favorite expression of Batanguenos, “Ala eh,” that would be spelled out in the signage.

Tamoria, who is also the PAMB chairman, issued the statement following the diverse public reaction generated by the proposal, which is similar to the iconic Hollywood sign planted atop a mountain in Los Angeles, California,

“The proposal is to use fish cages, and not concrete materials, to form the words ‘Ala eh!’ on the lake waters near the island, and which will be visible from the Tagaytay ridge,” Tamoria said.

According to Tamoria, the project was proposed by the Taal Lake Aquaculture Alliance during a recent PAMB Executive Committee meeting graced by Batangas Governor Vilma Santos-Recto.

“Gov. Vilma Santos-Recto graced the past EXECOM meeting and was indeed ecstatic about the idea since it will give a Batangueño identity to the place, but she did not insist on putting up the signage immediately,” Tamoria stressed.

If it pushes through, the signage may possibly look like this. 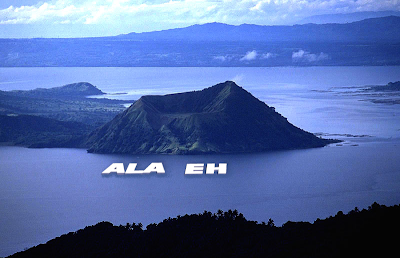