Reports said the entire clan is mourning the death of Ram who was shot and stabbed dead by unidentified suspects inside their residence in BF Homes Parañaque last Saturday, October 29, 2011. 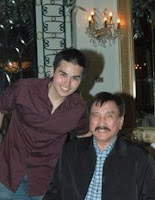 His half-brother, Senator Bong Revilla, in a media interview earlier said he condemns the brutal killing and vows to give Ram the justice he deserves.

RJ Revilla, another son of ex-senator Ramon Revilla Sr. from Genelyn Magsaysay, reportedly said they have not fully recovered from shock brought by the sudden death of his brother whose remains lie in state at Angelus Eternal Garden in Imus, Cavite.

He said members of the family were in disbelief over Ram's untimely demise.

According to RJ, they do not know anybody whom Ram had done injustice with which makes it difficult for the family to determine the motive of the killing.

Authorities have reportedly ruled out robbery as an angle in the investigation as nothing was taken from the residence.

RJ hopes for the capture of the killers and that justice for his brother be served soon.