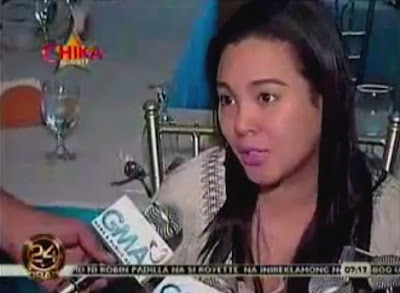 A 24 Oras news report said the actress was fuming mad after she was not able to withdraw her funds from a bank in Quezon Avenue, Quezon City, last Tuesday, October 25.

Claudine, who was with her laywyer Atty. Agnes Maranan that time, was heard saying “Nasaan na yung pera...ngayon wala na!” in the video.

The bank, some netizens in social networking sites said, is Union Bank. The person who supposedly withdrew the funds from the joint account has not been identified, but some people speculated that it was Claudine's husband, actor Raymart Santiago.

The couple's joint account reportedly has an “and/or” designation which means either of the two can withdraw from it.

Several reports said the couple had a fight and physical confrontation. Claudine, however, declined to give a statement while her husband could not be reached for comment at the time of the report.