By Admin
October 11, 2011Azkals vs NepalfootballGame Resultsports
Inspired to play at home, the Philippine Azkals defeated Nepal Himalayan Tigers 4 - 0 in their friendly football game at the Rizal Memorial Football Stadium in Manila on Tuesday, October 11, 2011. 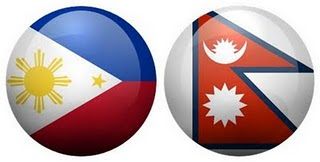 Philippines played well and dominated the 1st half. The team attempted to make shots seven times, none for the Nepalese players.

The Younghusbands successfully made the two goals for the Philippines in the 16th and 30th minute - first strike by Phil, followed by his brother James.

In the second half, the older Younghusband had another shot that went in at the 54th minute. And just a few clock ticks before regulation, at the 89th minute, Matthew Hartmann made his first goal for the Philippines.

Currently, Nepal is number 135th in the FIFA rankings, while Philippines ranks 166th so winning the match against the former is a notable achievement.