The Ateneo Blue Eagles dominated the best-of-three series, posting a 82-69 victory over the FEU Tamaraws on Saturday, October 1, 2011, at the Araneta Coliseum, before thousands of spectators and millions watching on TV.

Game 2 of ATENEO vs FEU finally took place following an earlier cancellation due to Typhoon Pedring. It was supposedly staged last Tuesday, September 27. 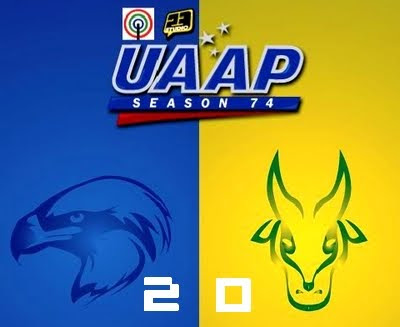 Both teams started strong. ADMU led by 2 down 3 minutes in the first quarter, but FEU's RR Garcia made a triple to shift the favor. They exchanged shots and arrived at the the fourth deadlock with 16 all, then suddenly, Ateneo launched a 7-2 run to take the lead in less than a minute to go in the first round.

Ateneo achieved an 8-2 run to get a five-point lead down six minutes in the third quarter. It was a sure win for Ateneo when they took a 17 point lead at 1:36 left in the final quarter. At that point, FEU appeared to have surrendered with some of its players getting emotional.

Ateneo's Nico Salva had an awesome performance, making 14 points to contribute to the accomplishments of Rookie of the Year awardee Kiefer Ravena and Mythical Five member Greg Slaughter. Salva averaged 19.5 points per game (78% field goals) in the finals.

Ateneo fans erupted in jubilation after the game and raised 5 fingers which signified their desire to grab the title next season. Coach Norman Black, who steered Ateneo to the 4th championship title, said all he wanted at this point in time is to enjoy the victory.

The four-peat championship is a first for the Blue Eagles in the UAAP, who have won a total of 6 titles in the collegiate league.

The Blue Eagles opened its four peat campaign by beating Adamson Falcons 55-51 then they beat their arch rival the De La Salle Green Archers 81-72. After beating DLSU they also beat the NU Bulldogs 86-62 then they also defeated the UE Red Warriors, 73-61. Then they defeated their neighbors along the Katipunan Avenue the UP Fighting Maroons in what some called the "Battle of Katipunan", 77-57 and the UST Growling Tigers, 66-53. Then on the final game of the 1st round of eliminations they faced the FEU Tamaraws and beat them 69-49, making their record an even better 7-0 after sweeping the first round of eliminations.

On the start of the second round of eliminations they once again faced the Tamaraws but unlike their game in the first round, the Eagles had a hard time beating the Tams. They actually almost lost the game before Kiefer Ravena exploded in the last minute of the last quarter, forcing the game into overtime and finally giving Ateneo its 8th consecutive win with the score of 74-67. After the game against FEU they faced and beat the Tigers once again this time by a dominating performance 82-57. Then they beat the Warriors, 74-70, as well as their arch rival, the Archers, 79-62, in one of the most lopsided Ateneo-La Salle games ever. Thereafter, they once again battled their Katipunan neighbors and beat them anew, 73-58. Then on September 3, 2011, Ateneo set another record in its second round game against the NU Bulldogs, when they handily defeated NU, 61-39.

According to Imperium Technology, the UAAP's official statistician, the 39 points output of the Bulldogs is a record lowest scoring output of a UAAP team based on available records from as far back as 1986. Ateneo head coach Norman Black explained that the Blue Eagles achieved this feat by employing a shutdown defense. Then on the final day of eliminations,with an unblemished 13-0 record, the Eagles faced the Falcons. On that game the Eagles tasted their only loss of the season, bowing down to Adamson, 62-46, making their record 13-1. But even though they lost their final game, the Eagles still held the number one spot and enjoyed the twice-to-beat advantage in the Final Four.

On their Final Four match they played against the number four seed, the Growling Tigers. At the end of 1st quarter of the game both teams are tied at 18-all. Then on 2nd quarter the Blue Eagles already got their groove going and ended the 1st half leading by 8, 38-30. On the 3rd quarter the Eagles continued their dominance that they've started on the 2nd quarter and ending the 3rd leading by 12, 52-40. Then on the final canto, the Tigers threatened the Eagles as the the Tigers found their groove once again led by Kevin Ferrer. But Kiefer Ravena didn't give up just like that as he led the Eagles and puts up some crucial shots and gave the Eagles 61-51 lead. But Jeric Fortuna, Jeric Teng and Chris Camus responded for the Tigers with a barrage of treys but still they fell short. With 5.5 seconds remaining and Ateneo has the 1 point lead, the Tigers fouled Nico Salva and they sent him to the line, Salva then made his 2 free throws and gave the Eagles a 3 points lead. The Eagles then nip the Tigers and book their ticket back into finals for the 4th straight year with a final score of 69-66. Greg Slaughter, Kiefer Ravena and Nico Salva led the Eagles with 17, 13 and 12 points respectively.

The Blue Eagles set a UAAP record in Season 74 by advancing to the Final Four for the 13th straight year. Ateneo's 13th straight semifinal appearance surpassed the 12 consecutive Final Four stint set by La Salle from 1994 to 2005.