By Admin
September 17, 2011replay videosamsungUAAP Season 74UP Pep Squadvideo replay
University of the Philippines (UP) Pep Squad did it again!

The cheerdancing team who colored its hair blonde won the 2011 Samsung UAAP Cheerdance Competition held at the Araneta Coliseum on Saturday, September 17, 2011. 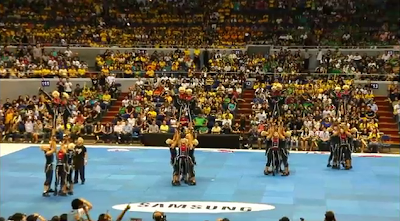 UP Pep Squad's “Madonna”-themed performance, blonde hair, energetic routine and the thunderous audience impact enabled them to bring home the championship title as well as the top prize of P340,000 once more.