For the latest update on Typhoon Pedring, click here. 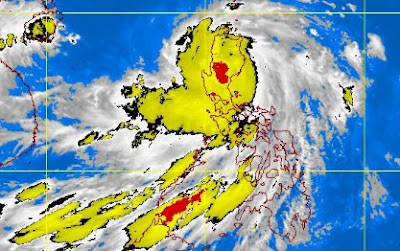 As of 10:00 p.m. today, Typhoon “Pedring” was spotted at 200 kilometers (km) West Northwest of Baguio City with maximum sustained winds of 120 kilometers per hour (kph) near the center and gustiness of up to 150 kph. It is forecast to move West Northwest at 19 kph.

Signal No. 2 (60-100 kph winds) is still up in the following areas:
Signal No. 1 (45-60 kph winds):
Public storm warning signals elsewhere are now lowered, PAGASA said, but residents in low lying and mountainous areas that affected by the typhoon are still alerted against possible flashfloods and landslides. Those living in coastal areas are also alerted against big waves or storm surges generated by this tropical cyclone.

Estimated rainfall amount is from 15 - 25 mm per hour within the 600 km diameter of the typhoon. Typhoon Pedring is expected to enhance the Southwest Monsoon and will bring scattered to widespread rains over Southern Luzon and Visayas, the weather bureau added.

The Department of Education (DepEd) has not yet announced yet whether or not there will be classes in the National Capital Region (NCR) and other affected areas on Wednesday.

For the latest update on Bagyong Pedring, access this page.