The Tropical Storm East of Northern Luzon has entered the Philippine Area of Responsibility (PAR) and was named “Quiel,” weather experts at the Philippine Atmospheric and Geophysical and Astronomical Services Administration (PAGASA) reported on Thursday, September 29, 2011. 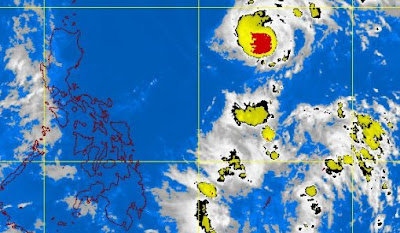 At 10:00 a.m. today, PAGASA spotted Tropical Storm “Quiel” 1,150 kilometers East of Aparri, Cagayan with maximum sustained winds of 110 kilometers per hour (kph) near the center and gustiness of up to 140 kph. It is forecast to move West at 13 kph, the weather agency said.

Weather forecasters estimated a rainfall amount of 15 to 25 millimeters per hour within the 300 km diameter of the tropical storm.

PAGASA has not raised any public storm warning signal yet as TS “Quiel” is still too far to directly affect any part of the country, but Undersecretary Graciano Yumul in a phone interview said this weather disturbance may intensify into a typhoon over the weekend.

If it will not change direction, “Quiel” may hit Northern Luzon upon landfall, Yumul reportedly said.