Shamcey Supsup may not be included in Top 15

By Admin
September 12, 2011Beauty and FashionMiss Universe 2011PhilippinesShamcey SupsupTop 16 Semi-Finalists
According to ABS-CBN reporter Dyan Castillejo, who's presently in Sao Paulo, Brazil to cover the most-awaited Miss Universe 2011 pageant, the judges may have already picked the Top 15 semi-finalists after the preliminary presentations held in the past week.

The Philippines' Shamcey Supsup, apparently, could be the Top 16 candidate.

The reason is that, according to Dyan, the Miss Universe Organization has decided to get the Top 16 beauties for the semis. The top fifteen will come from the judges' list while the sixteenth placer will be determined once the online voting result is in. 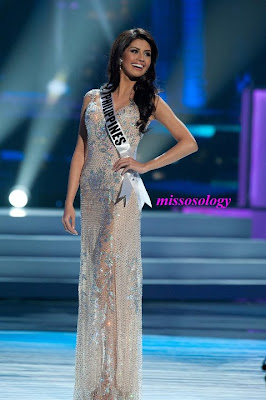 So, if Shamcey will not be included in the Top 15 but enters the Semi-Finals anyway, it means she won through votes.