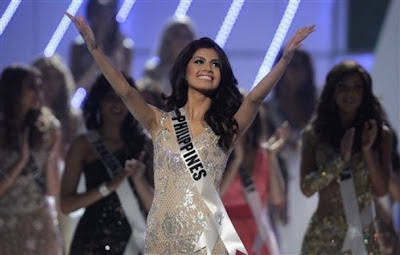 According to netizens, Oprah said via NBC News.

“I have reservations with the results. If the only basis is the Q and A portion, after having been trimmed down to 5, Ms. Philippines deserved to win. What made her different from the rest is that she had no seconds to rethink of her answer as she had no interpreter to break the ice. The rest had their interpreters and having breaks on seconds to think about their answers. Hands down, Ms. Philippines answered straight to the point.”

Although there's a Bombo Radyo report about it [view article] and it's nice to hear if Oprah really made that comment, we're still trying to find the original article to confirm its veracity. If she said it on television, we hope there's an online write-up too.

It's true that Shamcey is the only Miss Universe 2011 finalist to have answered the final question without an interpreter.

Pageant judge Vivica Fox asked her: “Would you change your religious beliefs to marry the person that you love? Why or why not?”

“I have my faith and my principles, and this is what makes me who I am. If the person loves me, he’ll love my God too,” she explained.

Update: It's verified. Oprah's alleged comment on the Miss Universe 2011 result is NOT TRUE. See the proof here.