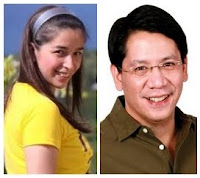 A TV Patrol report on Wednesday said Romulo proposed to Shalani at the Our Lady of Fatima church in Valenzuela City. The solon added that they are planning to get married next year.

Romulo reportedly gave Soledad a diamond ring last week. “That was an engagement ring. I asked her to marry me a week ago,” he said.

Romulo first asked for Shalani's hand from her mother, Mrs. Evelyn Soledad, three weeks ago, according to the report.