Regine Velasquez: Angeline Quinto is 'the next Superstar'

By Spicy Sugar
September 10, 2011Angeline QuintoASAP RocksEntertainmentNora AunorRegine VelasquezSarah Geronimo
The so-called “rivalry” between Sarah Geronimo and Angeline Quinto has been dug up once more after Asia's Songbird Regine Velasquez called the latter as “the next Superstar” as well as when talks spread that ABS-CBN is giving Angeline more exposure than Sarah on ASAP Rocks these days. 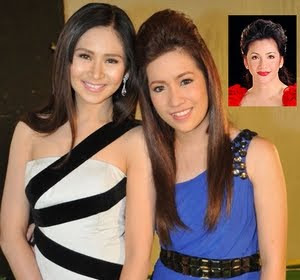 According to reports, Angeline has explained that it was only unintentionally shortened as Regine was supposed to say “next Female Pop Superstar.” She pointed out that no one can take the “Superstar” title away from Nora Aunor.

The first Star Power champion also insisted that she and Sarah are okay and they are both unaffected by the negative issues their detractors hurl against them.

On the other hand, the Popstar Princess told showbiz reporters that she respects Regine's compliment to the newcomer. Sarah, reports say, reiterated that there's no rivalry between her and Angeline.