By Admin
September 29, 2011NDRRMCnewsNueva EcijaStorm WatchTyphoon Pedring
The town of Jaen, Nueva Ecija, was submerged in flood waters in the wake of Typhoon Pedring. Mayor Santiago Austria told reporters that rainwater cascaded from the mountains to low-lying areas, killing at least three people. 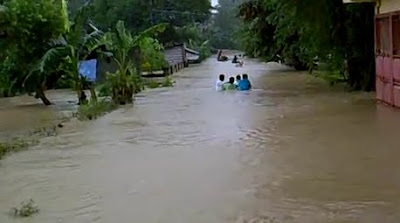 Austria reportedly said all 27 barangays in the municipality were flooded.

Meanwhile, the National Disaster Risk Reduction and Management Council (NDRRMC) in its latest report said 13,041 families or 57,308 individuals from 75 barangays in the entire province were affected. More than 6,000 displaced families stayed at 43 evacuation centers.

Among those reported dead was one Rosalina Cordita, 59-years-old, from barangay Amihan, Barrera in Cabanatuan City, who got drowned.

NDRRMC also said 2 vehicles, 3 rubber boats and 26 rescuers were dispatched to Nueva Ecija on Thursday for search and rescue operations. Some roads in the area were closed due to landslides.

The NDRRMC estimated the total cost of damages on infrastructure and crops at P7,325,000.