By Admin
September 03, 2011Born This Waybuy mp3downloadfree musicfree songsLady GagaMaria AragonStar Records
Maria Aragon, the eleven-year-old Filipina-Canadian internet sensation who got very famous for singing her own cover of Lady Gaga's “Born This Way,” has released her first, self-titled album under Star Records. 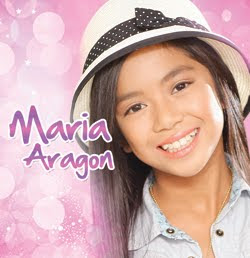 Her debut album, which is available in all record stores nationwide, has seven tracks that include “Born This Way” as the carrier single and other songs, as follows:
I've purchased and downloaded at www.starrecords.ph three tracks from Maria's album. The digital format is available for only P30 each. Worth the money!