By Admin
September 28, 2011Meralconewssocial networkingTyphoon Pedring
Aside from the social networking sites of DepEd, MMDA, PAGASA, ANC, GMA, ABS-CBN and other news organizations, the Twitter and Facebook pages of Manila Electric Co. (Meralco) were among the busiest during the onslaught of Typhoon Pedring in the NCR last Tuesday, September 27, 2011. 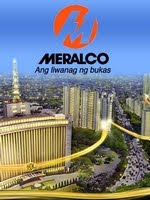 Most of the messages posted on Meralco's customer service web portals were netizens' reports, complaints and requests related to power outage/restoration.

In responding to numerous concerns, Meralco in one of its status updates told customers that the Service Identification Number (SIN), contact details and nearest landmarks are the information needed in making reports.

In a report by ANC on Wednesday, Meralco said around 200,000 households still don't have electricity, but the company says it plans to fully restore power within the day.